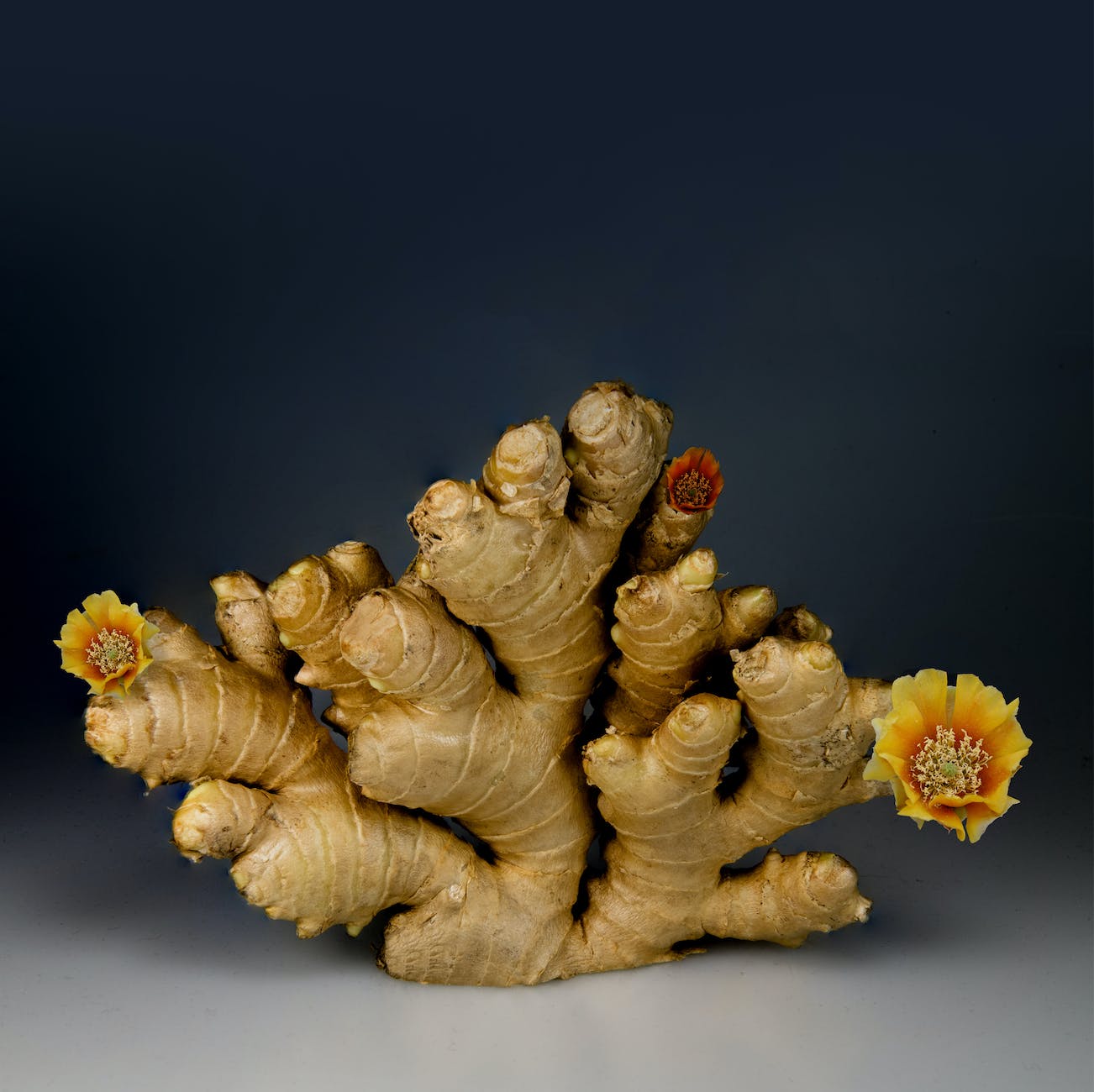 Ginger’s generic name, Zingiber, is derived from the Greek zingiberis, which comes from the Sanskrit name of the spice, singabera. Its use in India and China has been known from ancient times, and by the 1st century CE traders had taken ginger into the Mediterranean region. By the 11th century it was well known in England. The Spaniards brought it to the West Indies and Mexico soon after the conquest, and by 1547 ginger was being exported from Santiago to Spain.

The spice has a slightly biting taste and is used, usually dried and ground, to flavour breads, sauces, curry dishes, confections, pickles, and ginger ale. The fresh rhizome, green ginger, is used in cooking. The peeled rhizomes may be preserved by boiling in syrup. In Japan and elsewhere, slices of ginger are eaten between dishes or courses to clear the palate. Ginger is used medically to treat flatulence and colic.

Ginger contains about 2 percent essential oil; the principal component is zingiberene and the pungent principle of the spice is zingerone. The oil is distilled from rhizomes for use in the food and perfume industries.

Ginger has a very long history of use in various forms of traditional and alternative medicine. It’s been used to aid digestion, reduce nausea, and help fight the flu and common cold, to name a few of its purposes.

The unique fragrance and flavor of ginger come from its natural oils, the most important of which is gingerol.

Gingerol is the main bioactive compound in ginger. It’s responsible for much of ginger’s medicinal properties.

Gingerol has powerful anti-inflammatory and antioxidant effects, according to research. For instance, it may help reduce oxidative stress, which is the result of having an excess amount of free radicals in the body.

Ginger is high in gingerol, a substance with powerful anti-inflammatory and antioxidant properties.

2. Can treat many forms of nausea, especially morning sickness

Ginger appears to be highly effective against nausea.

It may help relieve nausea and vomiting for people undergoing certain types of surgery. Ginger may also help chemotherapy-related nausea, but larger human studies are needed.

However, it may be the most effective when it comes to pregnancy-related nausea, such as morning sickness.

According to a review of 12 studies that included a total of 1,278 pregnant women, 1.1–1.5 grams of ginger can significantly reduce symptoms of nausea.

However, this review concluded that ginger had no effect on vomiting episodes.

Although ginger is considered safe, talk with your doctor before taking large amounts if you’re pregnant.

It’s recommended that pregnant women who are close to labor or who’ve had miscarriages avoid ginger. Ginger is contraindicated with a history of vaginal bleeding and clotting disorders as well .

Just 1–1.5 grams of ginger can help prevent various types of nausea, including chemotherapy-related nausea, nausea after surgery, and morning sickness.

3. May help with weight loss

Ginger may play a role in weight loss, according to studies conducted in humans and animals.

A 2019 literature review concluded that ginger supplementation significantly reduced body weight, the waist-hip ratio, and the hip ratio in people with overweight or obesity.

A 2019 literature review of functional foods also concluded that ginger had a very positive effect on obesity and weight loss. However, additional studies are needed .

The evidence in favor of ginger’s role in helping prevent obesity is stronger in animal studies.

Rats and mice who consumed ginger water or ginger extract consistently saw decreases in their body weight, even in instances where they’d also been fed high fat diets.

Ginger’s ability to influence weight loss may be related to certain mechanisms, such as its potential to help increase the number of calories burned or reduce inflammation.

According to studies in animals and humans, ginger may help improve weight-related measurements. These include body weight and the waist-hip ratio.

4. Can help with osteoarthritis

It involves degeneration of the joints in the body, leading to symptoms such as joint pain and stiffness.

One literature review found that people who used ginger to treat their OA saw significant reductions in pain and disability .

Study participants received between 500 milligrams (mg) and 1 gram of ginger each day for anywhere from 3 to 12 weeks. A majority of them had been diagnosed with OA of the knee.

Another study from 2011 found that a combination of topical ginger, mastic, cinnamon, and sesame oil can help reduce pain and stiffness in people with OA of the knee (18Trusted Source).

There are some studies showing ginger to be effective at reducing symptoms of osteoarthritis, especially osteoarthritis of the knee.

This area of research is relatively new, but ginger may have powerful anti-diabetic properties.

In a 2015 study of 41 participants with type 2 diabetes, 2 grams of ginger powder per day lowered fasting blood sugar by 12% .

It also dramatically improved hemoglobin A1c (HbA1c), a marker for long-term blood sugar levels. HbA1c was reduced by 10% over a period of 12 weeks.

However, keep in mind that this was just one small study. The results are incredibly impressive, but they need to be confirmed in larger studies before any recommendations can be made.

In somewhat encouraging news, a 2019 literature review also concluded that ginger significantly reduced HbA1c in people with type 2 diabetes. However, it also found that ginger had no effect on fasting blood sugar .

Chronic indigestion is characterized by recurrent pain and discomfort in the upper part of the stomach.

People with functional dyspepsia, which is indigestion with no known cause, were given either ginger capsules or a placebo in a small 2011 study. One hour later, they were all given soup.

It took 12.3 minutes for the stomach to empty in people who received ginger. It took 16.1 minutes in those who received the placebo .

These effects have also been seen in people without indigestion. In a 2008 study by some members of the same research team, 24 healthy individuals were given ginger capsules or a placebo. They were all given soup an hour later.

Ginger appears to speed up emptying of the stomach, which can be beneficial for people with indigestion and related stomach discomfort.

Dysmenorrhea refers to pain felt during the menstrual cycle.

One of the traditional uses of ginger is for pain relief, including menstrual pain.

In a 2009 study, 150 women were instructed to take either ginger or a nonsteroidal anti-inflammatory drug (NSAID) for the first 3 days of their menstrual period.

More recent studies have also concluded that ginger is more effective than a placebo and equally as effective as drugs such as mefenamic acid and acetaminophen/caffeine/ibuprofen (Novafen).

While these findings are promising, higher quality studies with larger numbers of study participants are still needed .

Ginger appears to be very effective against menstrual pain when taken at the beginning of the menstrual period.

High levels of LDL (bad) cholesterol are linked to an increased risk of heart disease.

The foods you eat can have a strong influence on LDL levels.

In a 2018 study of 60 people with hyperlipidemia, the 30 people who received 5 grams of ginger-pasted powder each day saw their LDL (bad) cholesterol levels drop by 17.4% over a 3-month period .

While the drop in LDL is impressive, it’s important to consider that study participants received very high doses of ginger.

Many cited a bad taste in the mouth as their reason for dropping out of an OA study where they received doses of 500 mg–1 gram of ginger .

The doses taken during the hyperlipidemia study are 5–10 times higher. It’s likely that most people may have difficulty taking a 5-gram dose for long enough to see results .

In an older study from 2008, people who received 3 grams of ginger powder (in capsule form) each day also saw significant reductions in most cholesterol markers. Their LDL (bad) cholesterol levels dropped by 10% over 45 days (29).

These findings are supported by a study in rats with hypothyroidism or diabetes. Ginger extract lowered LDL (bad) cholesterol to a similar extent as the cholesterol-lowering drug atorvastatin .

Study subjects from all 3 studies also experienced drops in total cholesterol. Participants in the 2008 study, as well as the lab rats, also saw reductions in their blood triglycerides.

There’s some evidence, in both humans and animals, that ginger can lead to significant reductions in LDL (bad) cholesterol, total cholesterol, and blood triglyceride levels.

9. Contains a substance that may help prevent cancer

Ginger has been studied as an alternative remedy for several forms of cancer.

The anti-cancer properties are attributed to gingerol, which is found in large amounts in raw ginger. A form known as [6]-gingerol is viewed as especially powerful .

In a 28-day study of individuals at normal risk for colorectal cancer, 2 grams of ginger extract per day significantly reduced pro-inflammatory signaling molecules in the colon .

However, a follow-up study in individuals at a high risk for colorectal cancer didn’t produce the same results .

There’s some evidence, albeit limited, that ginger may be effective against other gastrointestinal cancers such as pancreatic cancer and liver cancer .

It may be effective against breast cancer and ovarian cancer as well. In general, more research is needed.

Ginger contains the substance gingerol, which appears to have protective effects against cancer. However, more studies are needed.

10. May improve brain function and protect against Alzheimer’s disease

Oxidative stress and chronic inflammation can accelerate the aging process.

They’re believed to be among the key drivers of Alzheimer’s disease and age-related cognitive decline.

Some animal studies suggest that the antioxidants and bioactive compounds in ginger can inhibit inflammatory responses that occur in the brain.

There’s also some evidence that ginger can help enhance brain function directly. In a 2012 study of healthy middle-aged women, daily doses of ginger extract were shown to improve reaction time and working memory .

In addition, numerous studies in animals show that ginger can help protect against age-related decline in brain function.

Animal studies suggest that ginger can protect against age-related damage to the brain. It can also help improve brain function in middle-aged women.

Gingerol can help lower the risk of infections.

In fact, ginger extract can inhibit the growth of many different types of bacteria.

According to a 2008 study, it’s very effective against the oral bacteria linked to gingivitis and periodontitis. These are both inflammatory gum diseases .

Fresh ginger may also be effective against the respiratory syncytial virus (RSV), a common cause of respiratory infections .

Ginger may help fight harmful bacteria and viruses, which could reduce your risk for infections.

Adding ginger to your diet

If you want to add ginger to your diet, you can do so through what you eat and drink.

The leafy stems of ginger grow about 1 metre (about 3 feet) high. The leaves are 15 to 30 cm (6 to 12 inches) long, elongate, alternate in two vertical rows, and arise from sheaths enwrapping the stem. The flowers are in dense conelike spikes about 2.5 cm (1 inch) thick and 5 to 8 cm (2 to 3 inches) long that are composed of overlapping green bracts, which may be edged with yellow. Each bract encloses a single small yellow-green and purple flower.

Ginger is propagated by planting rootstalk cuttings and has been under this type of cultivation for so long that it no longer goes to seed. Harvesting is done simply by lifting the rhizomes from the soil, cleansing them, and drying them in the sun. The dried ginger rhizomes are irregular in shape, branched or palmate. Their color varies from dark yellow through light brown to pale buff. Ginger may be unscraped (with all of its cork layer), partly scraped, or scraped or peeled (with all of its cork, epidermis, and hypodermis removed).

Ginger is loaded with nutrients and bioactive compounds that have powerful benefits for your body and brain.

It’s one of the very few superfoods actually worthy of that term.