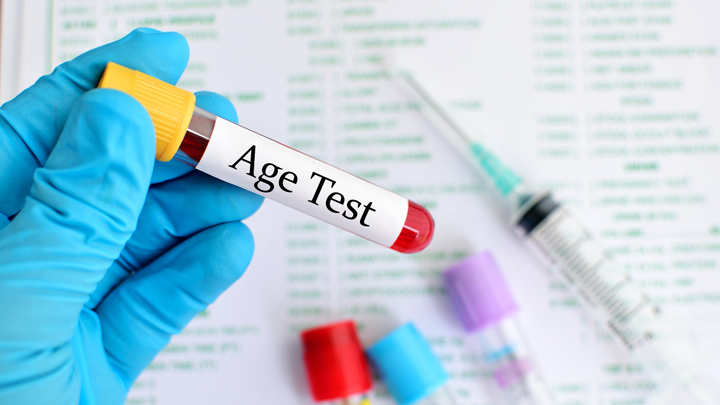 How can you tell how old someone is? Of course, you could scan their driver’s license or look for signs of facial wrinkles and gray hair. But, as researchers just found in a new study, you also could get pretty close to the answer by doing a blood test.

That may seem surprising. But in a recent study in Nature Medicine, an NIH-funded research team was able to gauge a person’s age quite reliably by analyzing a blood sample for levels of a few hundred proteins. The results offer important new insights into what happens as we age. For example, the team suggests that the biological aging process isn’t steady and appears to accelerate periodically—with the greatest bursts coming, on average, around ages 34, 60, and 78.

These findings indicate that it may be possible one day to devise a blood test to identify individuals who are aging faster biologically than others. Such folks might be at risk earlier in life for cardiovascular problems, Alzheimer’s disease, osteoarthritis, and other age-related health issues.

What’s more, this work raises hope for interventions that may slow down the “proteomic clock” and perhaps help to keep people biologically younger than their chronological age. Such a scenario might sound like pure fantasy, but this same group of researchers showed a few years ago that it’s indeed possible to rejuvenate an older mouse by infusing blood from a much younger mouse.

Those and other earlier findings from the lab of Tony Wyss-Coray, Stanford School of Medicine, Palo Alto, CA, raised the tantalizing possibility that certain substances in young blood can revitalize the aging brain and other parts of the body. In search of additional clues in the new study, the Wyss-Coray team tracked how the protein composition of blood changes as people age.

To find those clues, they isolated plasma from more than 4,200 healthy individuals between ages 18 and 95. The researchers then used data from more than half of the participants to assemble a “proteomic clock” of aging.  Within certain limits, the clock could accurately predict the chronological age of the study’s remaining 1,446 participants. The best predictions relied on just 373 of the clock’s almost 3,000 proteins.

As further validation, the clock also reliably predicted the correct chronological age of four groups of people not in the study. Interestingly, it was possible to make a decent age prediction based on just nine of the clock’s most informative proteins.

The findings show that telltale proteomic changes arise with age, and they likely have important and as-yet unknown health implications. After all, those proteins found circulating in the bloodstream come not just from blood cells but also from cells throughout the body. Intriguingly, the researchers report that people who appeared biologically younger than their actual chronological age based on their blood proteins also performed better on cognitive and physical tests.

Most of us view aging as a gradual, linear process. However, the protein evidence suggests that, biologically, aging follows a more complex pattern. Some proteins did gradually tick up or down over time in an almost linear fashion. But the levels of many other proteins rose or fell more markedly over time. For instance, one neural protein in the blood stayed constant until around age 60, when its levels spiked. Why that is so remains to be determined.

As noted, the researchers found evidence that the aging process includes a series of three bursts. Wyss-Coray said he found it especially interesting that the first burst happens in early mid-life, around age 34, well before common signs of aging and its associated health problems would manifest.

It’s also well known that men and women age differently, and this study adds to that evidence. About two-thirds of the proteins that changed with age also differed between the sexes. However, because the effect of aging on the most important proteins of the clock is much stronger than the differences in gender, the proteomic clock still could accurately predict the ages in all people.

Overall, the findings show that protein substances in blood can serve as a useful measure of a person’s chronological and biological age and—together with Wyss-Coray’s earlier studies—that substances in blood may play an active role in the aging process. Wyss-Coray reports that his team continues to dig deeper into its data, hoping to learn more about the origins of particular proteins in the bloodstream, what they mean for our health, and how to potentially turn back the proteomic clock.