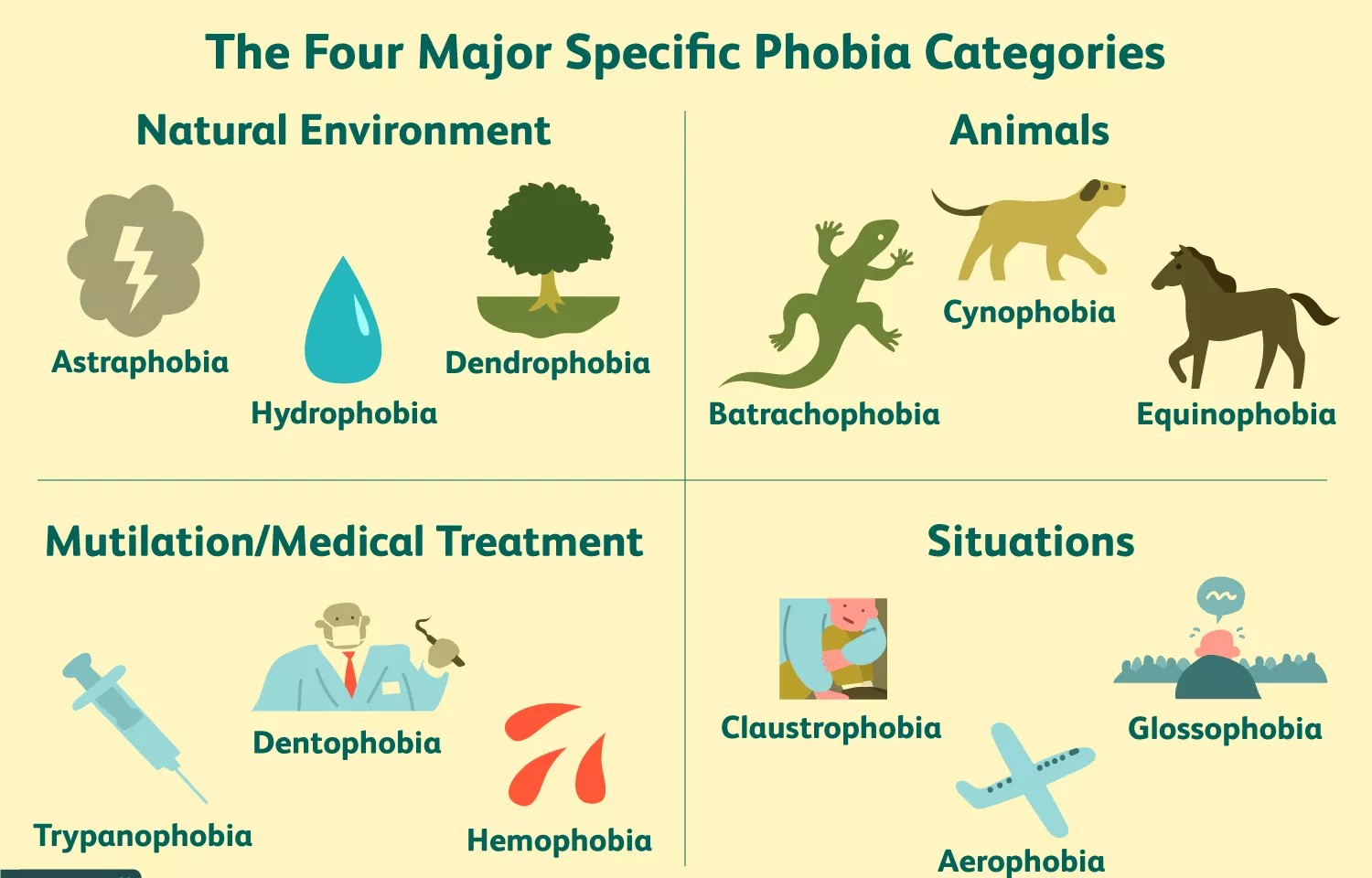 Phobias are one of the most common mental illnesses in the United States. According to the National Institute of Mental Health (NIH), approximately 12.5% of adults in the U.S. will deal with a specific phobia in their lifetime.1 Women are more likely to experience phobias than men. Typical symptoms of phobias can include nausea, trembling, rapid heartbeat, feelings of unreality, and being preoccupied with the fear object.

The American Psychiatric Association (APA) identifies three different categories of phobias: social phobias, agoraphobia, and specific phobias.2 When people talk about having a phobia of a specific object such as snakes, spiders, or needles, they are referring to a specific phobia.

While not comprehensive, this list of phobias offers a glimpse of the many phobias that can have a serious impact on a person’s life. As you may notice while you browse through this list, most specific phobias fall into one of four major categories:3

One important thing to remember is that virtually any object can become a fear object. The names of specific phobias are often formed as nonce words, or words coined for a single occasion only.

These names themselves are often formed by taking a Greek prefix that represents the fear object and adding the -phobia suffix. Because of this, any attempt at a completely exhaustive list of phobias would be a futile exercise. Any list of phobias could grow with the addition of newly coined terms for previously unnamed specific phobias.

A–Z List of Some of the More Common Phobias

While listing all of the phobias that may exist is not possible, it can be helpful to look through a list of some of the more commonly described phobias. As you can see by looking at this list, almost any object or situation can become the source of fear.

While phobias can be distressing and create disruptions in your life, they are treatable. Some of the different treatment options include therapy and medication.

Exposure-based treatments are the first-line approach in the treatment of phobias. In this type of treatment, you are gradually and progressively exposed to what you fear. You might start by just thinking about your phobia trigger and then move slowly toward looking at images of the object and finally being near the object in real life.

Types of exposure-based treatments that may be used include:4

During this process, you’ll also practice relaxation techniques to help calm your body when your fear response kicks in.

Often referred to as CBT, cognitive behaviorial therapy involves learning to identify the underlying negative thoughts that contribute to feelings of fear. Once you become better at noticing these thoughts, you can then work on replacing them with more positive, helpful thoughts.

Eye movement desensitization and reprocessing (EMDR) therapy utilizes rhythmic eye movements to help people process and recover from traumatic experiences. It is frequently used in the treatment of post-traumatic stress disorder (PTSD), but can also be effective in the treatment of a variety of other mental health conditions including phobias.5

Medications may be prescribed in some cases to help manage some of the symptoms you might be experiencing as a result of your phobia. Medications your doctor might prescribe include selective serotonin reuptake inhibitors (SSRIs), beta-blockers, and anti-anxiety drugs.