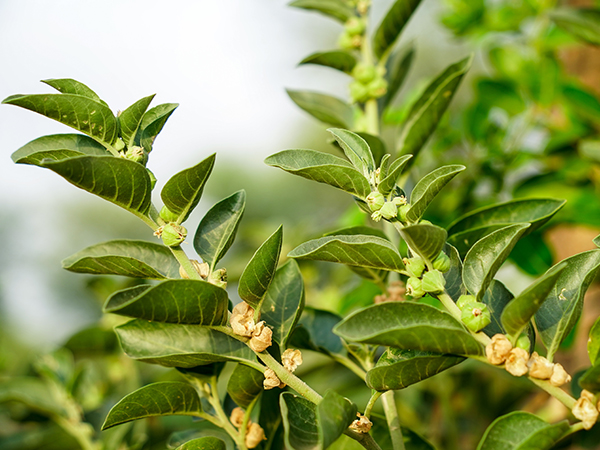 Ashwagandha (Withania somnifera), also known as Indian Ginseng, is an herb used in Ayurveda, the traditional medicine of India. Its root has a horsey smell and is said to confer the strength and virility of a horse. In Sanskrit, ashva means “horse” and gandha means “smell.” Various parts of the plant are used, but the most common supplemental form is an extract of its roots.

Ashwagandha is classified as an adaptogen, meaning it’s purported to enhance the body’s resilience to stress. Rodent and cell culture studies suggest that ashwagandha provides a wide range of health benefits, but there is a lack of direct evidence in humans to support most of these effects.

What are ashwagandha’s main benefits?

Ashwagandha is best known for its anxiolytic (anti-anxiety) and stress-relieving effects. It also seems to reduce cortisol levels, and this effect is supported by a number of studies. In addition, a growing body of evidence supports the efficacy of ashwagandha for improving total sleep time and sleep quality in people with and without insomnia.

What are ashwagandha’s main drawbacks?

Ashwagandha appears to be safe, but more long-term research specifically designed to evaluate its safety is needed. Ashwagandha may cause mild drowsiness and sedation for some people.

How does ashwagandha work?

Ashwagandha contains numerous bioactive compounds, namely alkaloids, flavonoids, glycosides, steroids, and steroidal lactones. Within the steroidal lactones are withanolides, which are considered to be responsible for most of the plant’s benefits.

Most of ashwagandha’s benefits are at least partly due to its potent antioxidant and anti-inflammatory properties. Ashwagandha can increase levels of antioxidant enzymes like glutathione peroxidase and superoxide dismutase, while also inhibiting lipid peroxidation. For more information on mechanisms of action, including molecular targets, see the Research Breakdown section.

As part of its ability to reduce stress and anxiety, ashwagandha also appears to influence the hypothalamic-pituitary-adrenal axis — which plays a central role in the stress response — as evidenced by its ability to decrease cortisol levels[Furthermore, ashwagandha seems to alter the signaling of several neurotransmitters, which are dysfunctional in anxiety disorders. Its ability to enhance GABAA receptor signaling, specifically, is thought to underlie its benefits for sleep.

Ashwagandha may improve endurance performance by increasing levels of hemoglobin(the protein in red blood cells responsible for transporting oxygen to the rest of the body) but more studies are needed to confirm this effect.