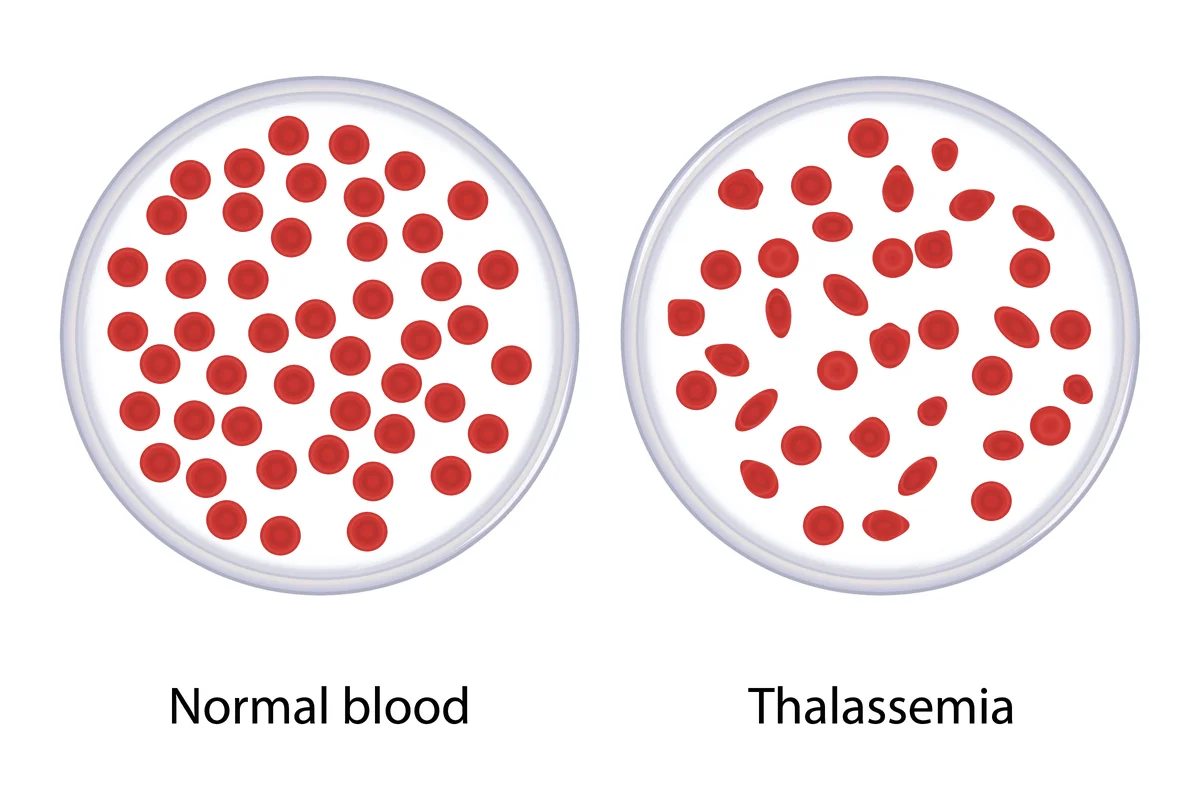 Everything You Need to Know About Thalassemia

Thalassemia is an inherited (i.e., passed from parents to children through genes) blood disorder caused when the body doesn’t make enough of a protein called hemoglobin, an important part of red blood cells. When there isn’t enough hemoglobin, the body’s red blood cells don’t function properly and they last shorter periods of time, so there are fewer healthy red blood cells traveling in the bloodstream.

Red blood cells carry oxygen to all the cells of the body. Oxygen is a sort of food that cells use to function. When there are not enough healthy red blood cells, there is also not enough oxygen delivered to all the other cells of the body, which may cause a person to feel tired, weak or short of breath. This is a condition called anemia. People with thalassemia may have mild or severe anemia. Severe anemia can damage organs and lead to death.

The symptoms of thalassemia can vary. Some of the most common ones include:

Not everyone has visible symptoms of thalassemia. Signs of the disorder also tend to show up later in childhood or adolescence.

Thalassemia occurs when there’s an abnormality or mutation in one of the genes involved in hemoglobin production. You inherit this genetic abnormality from your parents.

If only one of your parents is a carrier for thalassemia, you may develop a form of the disease known as thalassemia minor. If this occurs, you probably won’t have symptoms, but you’ll be a carrier. Some people with thalassemia minor do develop minor symptoms.

If both of your parents are carriers of thalassemia, you have a greater chance of inheriting a more serious form of the disease.

Thalassemia is most common in people from Asia, the Middle East, Africa, and Mediterranean countries such as Greece and Turkey.

There are three main types of thalassemia (and four subtypes):

All of these types and subtypes vary in symptoms and severity. The onset may also vary slightly.

How do I know if I have thalassemia?

Because thalassemias are inherited, the condition sometimes runs in families. Some people find out about their thalassemia because they have relatives with a similar condition.

The treatment for thalassemia depends on the type and severity of disease involved. Your doctor will give you a course of treatment that will work best for your particular case.

Some of the treatments include:

Your doctor may instruct you not to take vitamins or supplements containing iron. This is especially true if you need blood transfusions because people who receive them accumulate extra iron that the body can’t easily get rid of. Iron can build up in tissues, which can be potentially fatal.

If you’re receiving a blood transfusion, you may also need chelation therapy. This generally involves receiving an injection of a chemical that binds with iron and other heavy metals. This helps remove extra iron from your body.

Thalassemia major is the most severe form of beta thalassemia. It develops when beta globin genes are missing.

The symptoms of thalassemia major generally appear before a child’s second birthday. The severe anemia related to this condition can be life-threatening. Other signs and symptoms include:

This form of thalassemia is usually so severe that it requires regular blood transfusions.

Hemoglobin H develops as when a person is missing three alpha globin genes or experiences changes in these genes. This disease can lead to bone issues. The cheeks, forehead, and jaw may all overgrow. Additionally, hemoglobin H disease can cause:

Hydrops fetalis is an extremely severe form of thalassemia that occurs before birth. Most babies with this condition are either stillborn or die shortly after being born. This condition develops when all four alpha globin genes are altered or missing.

Thalassemia can quickly lead to anemia. This condition is marked by a lack of oxygen being transported to tissues and organs. Since red blood cells are responsible for delivering oxygen, a reduced number of these cells means you don’t have enough oxygen in the body either.

Your anemia may be mild to severe. Symptoms of anemia include:

Anemia can also cause you to pass out. Severe cases can lead to widespread organ damage, which can be fatal.

Thalassemia is genetic in nature. To develop full thalassemia, both of your parents must be carriers of the disease. As a result, you will have two mutated genes.

It’s important to get tested if one of your parents or a relative has some form of the disease.

In alpha minor cases, two genes are missing. In beta minor, one gene is missing. People with thalassemia minor don’t usually have any symptoms. If they do, it’s likely to be minor anemia. The condition is classified as either alpha or beta thalassemia minor.

Even if thalassemia minor doesn’t cause any noticeable symptoms, you can still be a carrier for the disease. This means that, if you have children, they could develop some form of the gene mutation.

Of all the babies born with thalassemia each year, it’s estimated that 100,000 are born with severe forms worldwide.

Children can start exhibiting symptoms of thalassemia during their first two years of life. Some of the most noticeable signs include:

It’s important to diagnose thalassemia quickly in children. If you or your child’s other parent are carriers, you should have testing done early.

When left untreated, this condition can lead to problems in the liver, heart, and spleen. Infections and heart failure are the most common life-threatening complications of thalassemia in children.

Like adults, children with severe thalassemia need frequent blood transfusions to get rid of excess iron in the body.

You may also consider avoiding fortified cereals, breads, and juices. They contain high iron levels, too.

Thalassemia can cause folic acid (folate) deficiencies. Naturally found in foods such as dark leafy greens and legumes, this B vitamin is essential for warding off the effects of high iron levels and protecting red blood cells. If you’re not getting enough folic acid in your diet, your doctor may recommend a 1 mg supplement taken daily.

There’s no one diet that can cure thalassemia, but making sure you eat the right foods can help. Be sure to discuss any dietary changes with your doctor ahead of time.

Since thalassemia is a genetic disorder, there’s no way to prevent it. However, there are ways you can manage the disease to help prevent complications.

In addition to ongoing medical care, the CDC recommendsTrusted Source that all individuals with disorder protect themselves from infections by keeping up with the following vaccines:

Walking and bike riding are examples of moderate-intensity workouts. Swimming and yoga are other options, and they’re also good for your joints. The key is to find something you enjoy and keep moving.

Thalassemia is a serious illness that can lead to life-threatening complications when left untreated or undertreated. While it’s difficult to pinpoint an exact life expectancy, the general rule is that the more severe the condition, the quicker thalassemia can become fatal.

According to some estimates, people with beta thalassemia — the most severe form — typically die by age 30. The shortened life span has to do with iron overload, which can eventually affect your organs.

Researchers are continuing to explore genetic testing as well as the possibility of gene therapy. The earlier thalassemia is detected, the sooner you can receive treatment. In the future, gene therapy could possibly reactivate hemoglobin and deactivate abnormal gene mutations in the body.

How does thalassemia affect pregnancy?

Thalassemia also brings up different concerns related to pregnancy. The disorder affects reproductive organ development. Because of this, women with thalassemia may encounter fertility difficulties.

To ensure the health of both you and your baby, it’s important to plan ahead of time as much as possible. If you want to have a baby, discuss this with your doctor to make sure that you’re in the best health possible.

Your iron levels will need to be carefully monitored. Preexisting issues with major organs are also considered.

Prenatal testing for thalassemia may be done at 11 and 16 weeks. This is done by taking fluid samples from either the placenta or the fetus, respectively.

Pregnancy carries the following risk factors in women with thalassemia:

If you have thalassemia, your outlook depends on the type of the disease. People who have mild or minor forms of thalassemia can typically lead normal lives.

In severe cases, heart failure is a possibility. Other complications include liver disease, abnormal skeletal growth, and endocrine issues.

Your doctor can give you more information about your outlook. They will also explain how your treatments can help improve your quality of life or increase your lifespan.