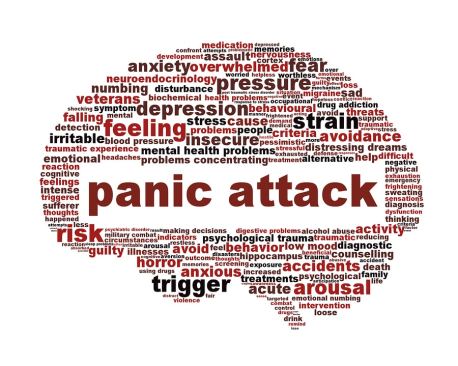 Sudden episode of intense fear or anxiety and physical symptoms, based on a perceived threat rather than imminent danger.

Panic attacks involve sudden feelings of terror that strike without warning. These episodes can occur at any time, even during sleep. People experiencing a panic attack may believe they are having a heart attack or they are dying or going crazy. The fear and terror that a person experiences during a panic attack are not in proportion to the true situation and may be unrelated to what is happening around them. Most people with panic attacks experience several of the following symptoms:

People with panic disorder may be extremely anxious and fearful, since they are unable to predict when the next episode will occur.

It is not clear what causes panic disorder. In many people who have the biological vulnerability to panic attacks, they may develop in association with major life changes (such as getting married, having a child, starting a first job, etc.) and major lifestyle stressors. There is also some evidence that suggests that the tendency to develop panic disorder may run in families. People who suffer from panic disorder are also more likely than others to suffer from depression, attempt suicide, or to abuse alcohol or drugs.

Avoiding caffeine, nicotine, alcohol and recreational drugs may help relieve fear and anxiety. Getting regular sleep and exercise, and practicing relaxation techniques such as deep breathing and yoga may also help.

There are several medicines that can make panic attacks less severe or stop them altogether.

Antidepressants are very effective in preventing anxiety and panic attacks. Often they completely stop the attacks. You don’t have to be depressed for them to help. Side effects are usually mild. Antidepressants will not make you lose control or change your personality. These medicines can be used for as long as necessary, even for years.

Anti-anxiety medicines are another useful medication for panic attack. As their name suggests, these medicines give relief from fear and anxiety. They should be used only for a short period of time (a few weeks to a few months), unless you absolutely can’t function without them. Never suddenly stop taking either of these medicines. If you need to stop, these medicines should be slowly tapered off over several weeks under your doctor’s supervision.

How long does treatment last?

How long treatment continues depends on you. Stopping panic attacks completely is a reasonable goal. Your doctor will design a treatment plan just for you. A treatment period lasting at least 6 to 9 months is usually recommended. Some people taking medicine for panic disorder are able to stop treatment after only a short time. Other people need to continue treatments over a long period of time, or even for their lifetime.

How can panic disorder be prevented?

It may not be possible to prevent panic disorder. However, you can work to reduce your symptoms by avoiding alcohol and stimulants such as caffeine as well as illicit drugs. It is also helpful to notice if you are experiencing symptoms of anxiety following a distressing life event. If you are bothered by something that you experienced or were exposed to, discuss the situation with your primary care provider.